Greetings! This is Dr. Stacey Camp, Director of the MSU Campus Archaeology Program. This past year has been one of constant change for our program. We have a new Campus Archaeologist, Ben Akey, after saying goodbye to our last Campus Archaeology, Jeff Burnett. We have managed to keep our program running amid still evolving COVID-19 protocols. And, as discussed in the previous blog post, we returned to running an archaeological field school this summer after two summers without one!

This past week I had the pleasure of celebrating my colleague Dr. Jodie O’Gorman’s career and life’s work as a Midwestern archaeologist at the 2022 Midwest Archaeology Conference. Jodie was an essential part of our program’s earliest days. I also had the chance to present a paper in her honor at a symposium comprised of her colleagues, friends, and former students. The symposium just happened to be organized by none other than our program’s founder and former director, Dr. Lynne Goldstein. The symposium also featured many former MSU Campus Archaeology Program Fellows and Campus Archaeologists.

I chose to give a talk (with Ben Akey and Jeff Burnett) on the work we continue to do on life on MSU’s campus directly after World War II. During my talk, I shared an October 1947 Ladies Home Journal article I happened upon in MSU’s University Archives and Historical Collections. This article examined the lives of veteran students’ wives and children. It also featured some really incredible colorized and black and white photographs of students and campus from 1947.

As we have detailed in previous blogs, life on campus during this time period was very different than life on campus today. After World War II, campus transformed into a place that was welcoming to veterans using the GI Bill to pursue an education. President Hannah had the foresight to plan for veterans and their families to live on campus, seeking out millions of dollars to support the construction of temporary housing known as “Spartan City” or “Spartan Village” (the latter not to be confused with today’s Spartan Village).

Families of this generation, who were known as the “GI Generation or Greatest Generation,” delayed having children both due to the Great Depression and World War II, which resulted in the “Baby Boom” or “Boomers” generation in post-WWII America. As a result, hundreds of children lived on campus during the late 1940s and 1950s. When veterans moved into Spartan City, their wives immediately organized to address the needs of these growing households. They created a social and educational organization known as “Spartan Wives.” Spartan Wives helped build a nursery at which both parents were expected to work; they organized charities to support families (on and off campus) in need; they organized medical clinics to help care for the numerous children; they championed activist causes, especially ones that supported women’s access to healthcare and an education; and they established numerous educational opportunities for women and children living in Spartan City. Spartan Wives were awarded “Ph.T.” degrees (which stood for “pushed hubby through”) when their husbands graduated from MSU. These are just a few of the many activities in which Spartan Wives engaged.

The Spartan Wives’ archives are housed at MSU’s University Archives and Historical Collections, including scrapbooks that detail the rich experiences of club members throughout the club’s history. Many of the artifacts that we recovered during this summer’s archaeological field school (2022) and the summer of 2020’s construction project on Service Road are directly associated with the people who lived on campus immediately following World War II.

After spending many hours in the Spartan Wives’ archives, I have been struck by the parallels between the late 1940s and our contemporary world. Both time periods involved rebuilding amidst societal stress and turmoil. The Spartan Wives experienced extreme hardship. When they arrived at Spartan City, they found housing to still be under construction. In some cases, families had to share communal bathing and showering facilities. A Michigan State News article dating to April 23rd, 1948, described Spartan City as follows: “Sand-swept ‘lawns,’ potholed streets, unpainted dwellings, and field problems plague the residents of Spartan City after the inauguration of their local ‘reform’ government…” 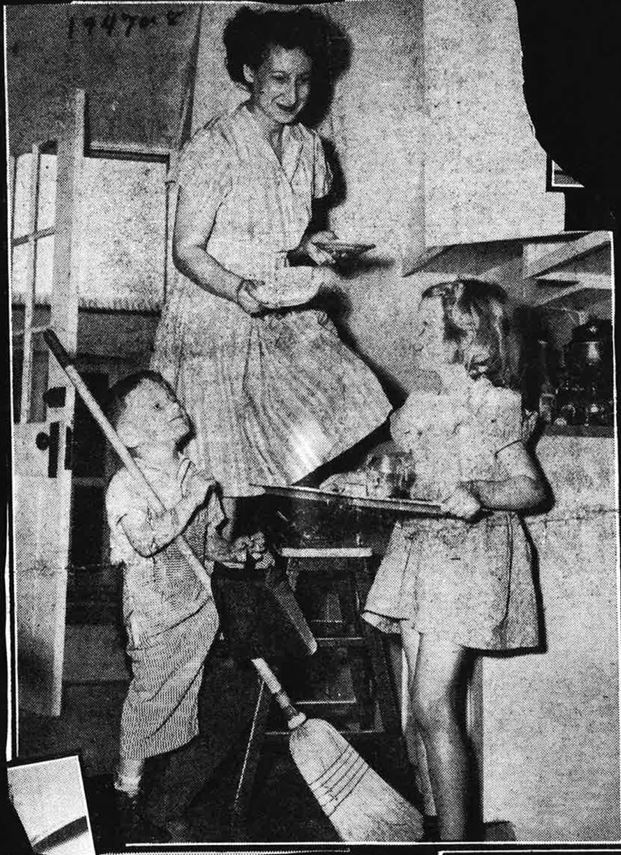 Edna Brookover, pictured above with her children (MSU University Archives + Historical Collections, Wilbur Brookover Papers, “Life in Faculty Quonset Village on Cherry Lane – 1946,” Folder 1, Box: File Drawer, Collection, UA 17.156), described life in temporary housing for faculty, some of which comingled with Spartan Village. She wrote a manuscript entitled “Life in Faculty Quonset Village on Cherry Lane – 1946” in 1990, which is held at MSU’s University Archives and Historical Collections. As the wife of a faculty member, Edna had firsthand knowledge of what life was like in Spartan Village. Of the housing complex, she wrote: “Although the buildings were not finished inside, everyone was moving in. For a while some had to use their neighbor’s bathrooms. The Village was teeming with all ages of children, parents, trucks, and workmen” (Brookover, 1990, p. 9).

What can we learn from life on campus after WWII? Despite the tragedies and horrors witnessed by the Greatest Generation, they were able to survive with the little they had. They formed communal bonds with fellow classmates and Spartan City residents, building clubs, nurseries, and mutual aid societies to help others. They started to envision a new campus, one that was broader than the smaller study body it had previously served. As we move forward in these challenging times for both MSU and our world, I think it is best to look back in time and find inspiration in how previous students, staff, and faculty persisted and relied upon each other amid extraordinary obstacles.

Author: Stacey Camp
Filed Under: Uncategorized
A Look Back at CAP’s 2022 Field School
Another day, another mystery in the CAP lab…